After arriving at Yeşilköy Airport on his B.E,A, flight for his assignment in From Russia With Love, James Bond is met outside customs by a car sent by Darko Karim.

…a gleaming aristocrat of a car—an old black basket—work Rolls Royce coupé—de—ville that Bond guessed must have been built for some millionaire of the ’20s.

This car, certainly “elegant” and comfortable, makes several appearances in the film, as Bond and Karim are driven around the city.

While a “coupé de ville” can describe a car in which the driver compartment is open (or without a roof) while the passenger compartment is closed, it can also just mean a car with a partition (usually glass) between the compartments, or even a removable roof over one or both compartments.

At a minimum, this is a similar car to that which picked up Bond. The detail I’m missing is the “basket-work.” Apparently some cars of that age actually were partially made of a basket-type material, (Edit – it was a paint design – see comment below) at least on some outside paneling. Something like this: 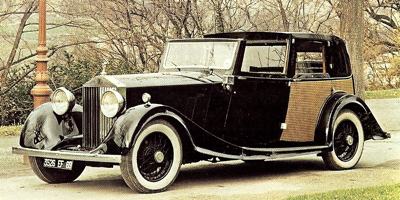 This Rolls Royce model is from 1935, so it’s likely not the one in the novel, but you get the idea of the basket-type.

Whichever car it ultimately was, once again, Ian Fleming was referencing a top of the line, classic car.