In the final chapter of Diamonds Are Forever, James Bond is completing his assignment at the same location in which the novel opened.

The setting is much the same, the diamond smuggler at the start of the pipeline is awaiting the pickup of his stones from the next individual up the pipeline. But also waiting are James Bond and a small support team of three – a sound-detection operator, an officer from the Freetown Garrison Force and a Corporal, presumably from the same.

They have at their disposal an Army truck, along with the locator and the Bofors mounted beside it.

When the smuggler and his contact rendezvous, the smuggler is killed and the contact attempts to escape in the helicopter in which he arrived.

Bond hops on the Bofors.

Down among the low bush the truck stopped with a jerk and Bond leapt for the iron Saddle of the Bofors. “Up, Corporal,” he snapped to the man at the elevation lever. He bent his eyes to the grid-sight as the muzzle rose toward the moon. He reached to pull the firing selector lever off ‘safe’ and put it on ‘single fire’. ‘And left ten.’

‘I’ll keep feeding you tracer.’ The officer beside Bond had two racks of five yellow-painted shells in his hands.

Bond’s feet settled into the trigger pedals and now he had the helicopter in the centre of the grid. ‘Steady,’ he said quietly.

After two misses and an adjustment, Bond switches to ‘Auto Fire’ and does hit the helicopter in the tail section, sending it, and its pilot spiraling down to destruction.

Bofors was a Swedish arms manufacturing company, which manufactured the 40 mm anti-aircraft gun used here. They were immensely popular during World War II so much so that anti-aircraft guns in general were often referred to as Bofors. 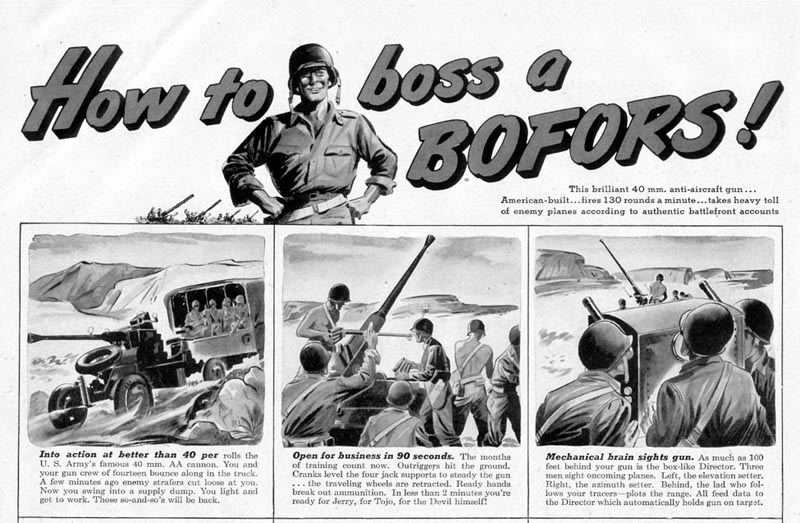 One thought on “Bofors”