This page will be updated as we go through the novels)

This Kentucky-based barrel-aged whisky seems to be a Bond staple when abroad. 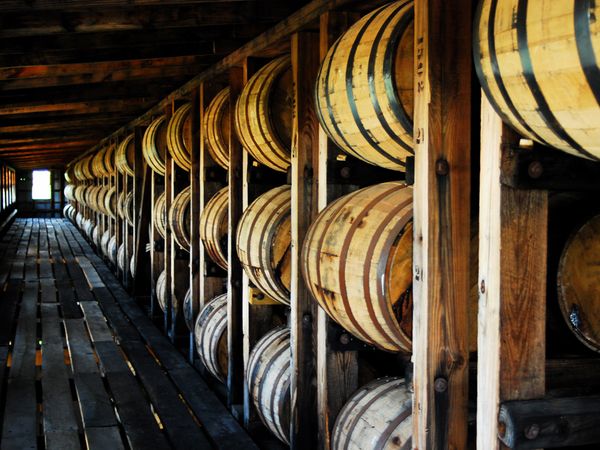 An observation can be made about Bond’s drinking preferences and habits. He’ll drink a martini at a bar or restaurant or when in company, while when drinking alone or in his hotel room, he often has bourbon.

He has a few favorite brands that are specifically mentioned throughout the series. These each have their own page:

Here are other references to Bond drinking Bourbon throughout the series.

In Live and Let Die, Bond orders Old Fashions on the Silver Phantom, stipulating Old Grandad Bourbon. Before meeting up with The Robber, he has a quarter of a pint of Old Grandad with his steak dinner, and  later has two double Old Grandads on the rocks while preparing to leave Tampa.

The opening chapter of Goldfinger is entitled REFLECTIONS IN A DOUBLE BOURBON and Bond has several before heading out with Mr Dupont.

In Thunderball, after finding the plane, Bond goes back to his room and orders a “club sandwich and double bourbon on the rocks” before phoning Domino.

In The Spy Who Loved Me, Vivienne Michel is consuming the last of her bottle of Virginia Gentleman bourbon as the story gets going.

In On Her Majesty’s Secret Service, while at Piz Gloria, Bond sits next to Ruby at dinner, who is having a Daiquiri, and Bond orders a double Bourbon on the rocks.

After Tracy gives Bond a detailed description of what she had for dinner, Bond tells her over the phone that “I had two ham sandwiches with stacks of mustard and half a pint of Harper’s Bourbon on the rocks.The bourbon was better than the ham.”

When Bond meets Marc-Ange to discuss the commando job on Piz Gloria, he “poured himself a stiff Jack Daniel’s sourmash bourbon on the rocks and added some water.”

In You Only Live Twice, Bond, while at the Miyako hotel in Kyoto, Bond orders “a pint of Jack Daniels and a double portion of eggs Benedict to be brought up to his room.”

Fleming himself preferred bourbon to scotch. He had the notion that it was somehow better for his heart as he explained to Richard Hughes: ‘The muscles expand under bourbon; Dikko, but they contract under scotch. ‘ He also suggested that bourbon counteracted the ill-effects of the nicotine in the many cigarettes that he smoked each day. (Foreign Devil: Thirty Years Of Reporting In The Far East by Richard Hughes)

Sadly, history proves out that Mr Fleming’s theories were perhaps not accurate in this case, at least.