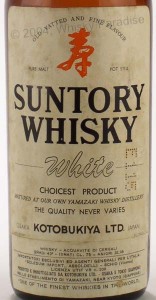 This Japanese whisky has a surprisingly long heritage, even when it was mentioned in You Only Live Twice.

While Bond tells Dikko Henderson :”I can’t believe Japanese whisky makes a good foundation for anything“, both Dikko and Tiger consume it in the novel.

Dikko defends the brand, “But you’re wrong about Suntory. It’s good enough brew. Stick to the cheapest, the White Label, at around fifteen bob a bottle. There are two smarter brands, but the cheap one’s the best.”

Tiger has his with a splash of soda. Bond, meanwhile continues his prejudice against the Japanese whisky, preferring Sake throughout the novel.

While James Bond is normally associated with the vodka martini, it might be more accurate to associate Fleming’s Bond with whisky drinks, and especially the whisky and soda.

In Live and Let Die, when Bond and Felix Leiter head out to Harlem, they have at least three rounds of scotch-and-sodas. At Sugar Rays it was Haig and Haig Pinchbottle. At the Savoy Ballroom and at The Boneyard, it is just scotch-and-soda.

When Bond arrives in Jamaica, Strangways poured a strong whisky- and-soda for both of them.

In Moonraker, the drink appears several times in the book. M has it at Blades, as do Drax, Basildon and other principals of the night. On the night Major Tallon was killed, he was having a whisky and soda, and Bond in his follow up to the murder has the same.

As he prepares to head to Crab Key to take on Dr. No, Bond has Canadian Club with soda-water.

At the start of Thunderball, Bond is feeling the effects of having had eleven (11!) whisky and sodas the preceding evening.

In On Her Majesty’s Secret Service, the first time Bond meets “the girls” as Sir Hilary Bray, he orders a whisky and soda from the barman.

At his final meal on the mountain, even as he is planning his escape, “Bond concentrated on getting plenty of whisky and food under his belt.”

At Quarterdeck, after the meeting with M on Christmas Day, it is tea time. M orders tea from Hammond, but then says ‘Or rather have a whisky and soda?’ ‘Whisky, please, sir.’ said Bond with infinite relief.

At two in the morning, Bond arrives at the home of the Swiss representative of the secret service, and says “a drink will fix me.” Muir then pours himself a thin whisky and soda to keep Bond company. We’re assuming Bond had the same.

I need to research this further, but I’d be willing to guess that in the Fleming novels, Bond consumes more whisky and sodas than he does martinis.

The whisky soda may be dismissed by some modern drinkers – liquor.com wrote a defense of the drink – and cited a NY Times article that showed that adding soda (or just water) does not just dilute or weaken the drink:

“Aroma molecules are also more chemically similar to alcohol molecules than they are to water, so they tend to cling to alcohol, and are quicker to evaporate out of a drink when there’s less alcohol to cling to,” wrote food scientist Harold McGee in The New York Times. “Add water and there’s less alcohol to irritate and burn, and more aroma release.” 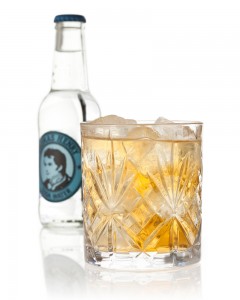 In Diamonds Are Forever, James Bond is in America, and is again escorted by Felix Leiter for a time and given lessons in the native food and drink.

He walked home with the crowds, had a shower and some sleep, and then found his way to a restaurant near the sales ring and spent an hour drinking the drink that Leiter had told him was fashionable in racing circles – Bourbon and branch water. Bond guessed that in fact the water was from the tap behind the bar, but Leiter had said that real Bourbon drinkers insist on having their whisky in the traditional style, with water from high up in the branch of the local river where it will be purest. The barman didn’t seem surprised when he asked for it, and Bond was amused at the conceit.

At least five times in the novel Bond has this drink. When he is in Las Vegas, he orders the drink again, and tests the bartender, as Leiter had told him Vegas was a desert and there were no river branches to get the water out of.

He walked over to the bar and ordered himself a Bourbon and branch water to celebrate the five thousand dollars in his pocket.

The barman produced a corked bottle of water and put it beside Bond’s ‘Old Grandad’.

‘Where’s this come from? ‘ asked Bond, remembering what Felix Leiter had said.

‘Over by Boulder Dam,’ said the barman, seriously. ‘Comes in by truck every day. Don’t worry,’ he added “it’s the real stuff.”

When he is being held by Spang in Spectreville, Bond also demands a bourbon and branch water “half and half” before talking. Nowadays, Branch is simply a term that many bourbon drinkers use for water.