In Goldfinger, James Bond, who had been jonesing for a slice of the easy life, is given his wish, for a night at least, by Mr Junius Du Pont, who is hoping that 007 can help him out with a problem. When Bond accepts, they head out to dinner.

They drew up at a white-painted, mock-Regency frontage in clapboard and stucco. A scrawl of pink neon said: BILL’S ON THE BEACH. While Bond got out, Mr Du Pont gave his instructions to the chauffeur. Bond heard the words. ‘The Aloha Suite,’ and ‘If there’s any trouble, tell Mr Fairlie to call me here. Right?’

They went up the steps. Inside, the big room was decorated in white with pink muslin swags over the windows. There were pink lights on the tables. The restaurant was crowded with sunburned people in expensive tropical get-ups . – brilliant garish shirts, jangling gold bangles, dark glasses with jewelled rims, cute native straw hats. There was a confusion of scents. The wry smell of bodies that had been all day in the sun came through.

Mr Du Pont slapped his menu shut. He said to Bond, ‘Now, why don’t you just leave this to me? If there’s anything you don’t like, send it back.’ And to the head waiter, ‘Stone crabs. Not frozen. Fresh. Melted butter. Thick toast. Right?’

Mr Du Pont turned to Bond. He smiled and raised his eyebrows.

While they awaiting their meal, Mr Du Pont tells Bond of his problem. When the meal comes, conversation ceases.

A bustle of waiters round their table saved Bond having to think up a reply. With ceremony, a wide silver dish of crabs, big ones, their shells and claws broken, was placed in the middle of the table. A silver sauceboat brimming with melted butter and a long rack of toast was put beside each of their plates. The tankards of champagne frothed pink. Finally, with an oily smirk, the head waiter came behind their chairs and, in turn, tied round their necks long white silken bibs that reached down to the lap.

Bond was reminded of Charles Laughton playing Henry VIII, but neither Mr Du Pont nor the neighbouring diners seemed surprised at the hoggish display. Mr Du Pont, with a gleeful ‘Every man for himself, raked several hunks of crab on to his plate, doused them liberally in melted butter and dug in. Bond followed suit and proceeded to eat, or rather devour, the most delicious meal he had had in his life.

The meat of the stone crabs was the tenderest, sweetest shellfish he had ever tasted. It was perfectly set off by the dry toast and slightly burned taste of the melted butter. The champagne seemed to have the faintest scent of strawberries. It was ice cold. After each helping of crab, the champagne cleaned the palate for the next. They ate steadily and with absorption and hardly exchanged a word until the dish was cleared.

Afterwards, Bond is slightly horrified at the entire display, but then realizes he got exactly what he had been asking for just a couple of hours before.

According to multiple accounts, including the officially sanctioned James Bond: The Man and His World, the inspiration for Bill’s on the Beach was the well-known Joe’s Stone Crab on Miami Beach. Ian Fleming himself ate there, thought enough of the experience to include a version of it in Goldfinger.

Given Fleming’s fondness for name-dropping various locations, I’ve often wondered why for some places he uses the real name, while for others he creates a fictional name based on a real location. Did “Bill’s on the Beach” just sound better to him than “Joe’s Stone Crab?”

This looks pretty good to me: 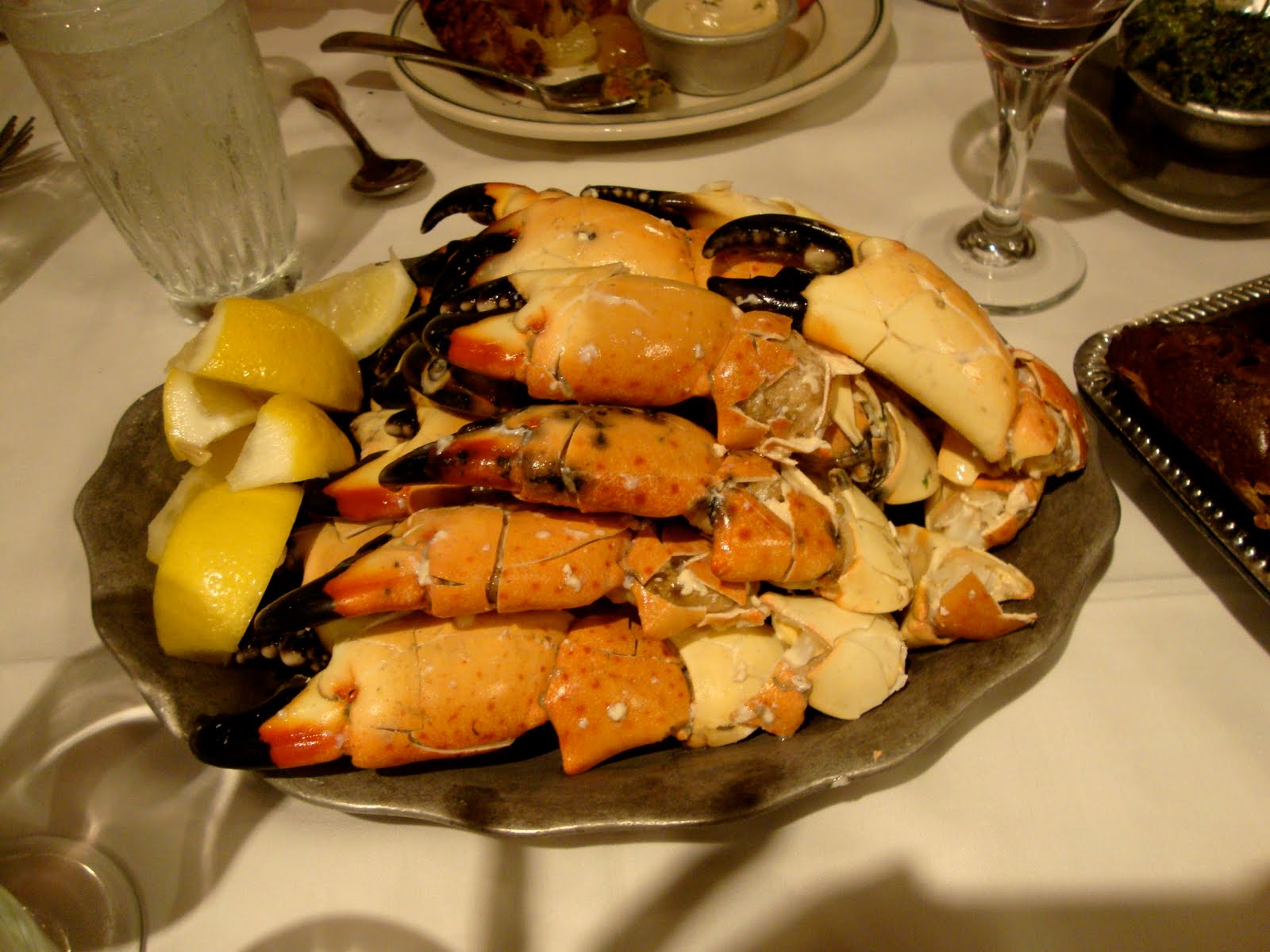 James Bond drives across the bridge from St Petersburg to Tampa after his second meeting with The Robber in Live and Let Die.

The original bridge was constructed in 1924 and this was the one on which Bond traveled. Three years after the novel takes place, a second span was added to the bridge. At one time it was the longest bridge in the world. 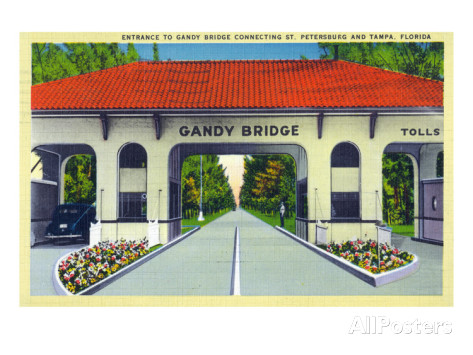 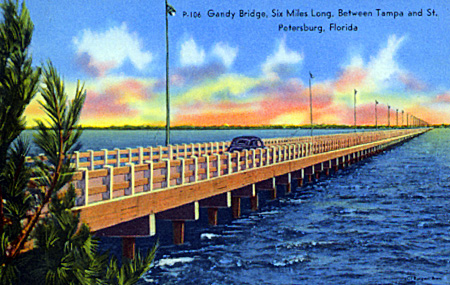 Bond enjoys the cool air of the bay on his face, and at the end of the bridge, he turns left towards the Tampa airport, spending the night at the first motel that looked awake. After awaking at midday, he writes his report to the FBI and heads to the airport.

In Live and Let Die, James Bond and Felix Leiter make their Florida headquarters on Treasure Island, at a place called The Everglades. Treasure Island is next to St. Petersburg, and has been a popular beach area for many years.

Bond describes how he and Solitaire arrived there:

they were checked at the intersection of Park Street and Central Avenue, where the Avenue runs on to the long Treasure Island causeway across the shallow waters of Boca Ciega Bay.

You can see on the map the intersection of Park and Central which looks like this today.

Bond paid off the cab at The Everglades, a group of neat white-and-yellow clapboard cottages set on three sides of a square of Bahama grass which ran fifty yards down to a bone-white beach and then to the sea. From there, the whole Gulf of Mexico stretched away, as calm as a mirror, until the heat-haze on the horizon married it into the cloudless sky.

They’re assigned to cabin number one – right on the beach.

While this is not The Everglades, it is another group of cottages on Treasure Island from about the same time period.

When Felix Leiter goes missing one morning, Bond receives a call at The Everglades from a “Dr Roberts” at Mound Park Hospital, saying his friend is there. Bond hurries over. 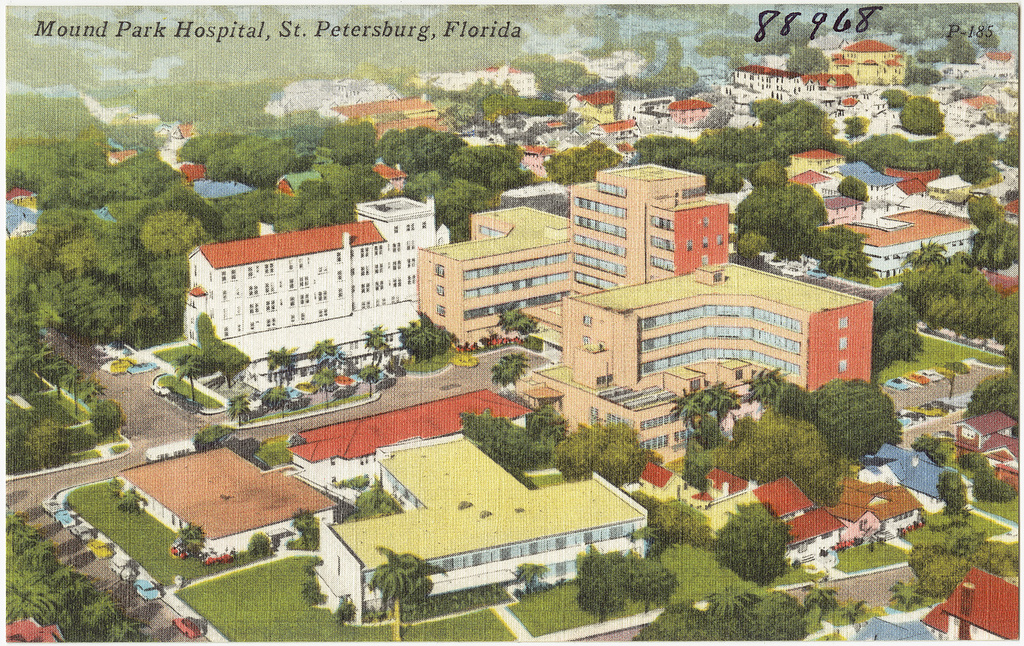 The call turns out to be a misdirection play to get Bond away from the cottage.

Here are a few other views of Treasure Island.

James Bond briefly visits the city of Jacksonville in Live and Let Die, when he and Solitaire hop off the Silver Phantom train to avoid Mr Big’s men.

The station they would’ve entered at that time would’ve been the Union Terminal, which at one time was the largest railroad station in the south.

The platform which they exited the Silver Phantom would’ve looked like this: 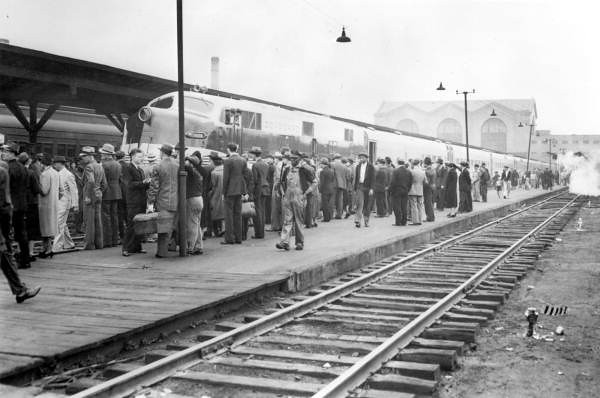 This photo is from the debut of the Silver Meteor in Jacksonville.

Bond and Solitaire go for a “bad” breakfast at a nearby diner, and then come back.

When they had paid they wandered back to the station waiting-room.

The sun had risen and the light swarmed in dusty bars into the vaulted, empty hall. They sat together in a corner and until the Silver Meteor came in Bond plied her with questions about The Big Man and she could tell him about his operations.

While the building still stands, it is no longer a train station. Here is what the room that Bond and Solitaire likely sat in looks like today. 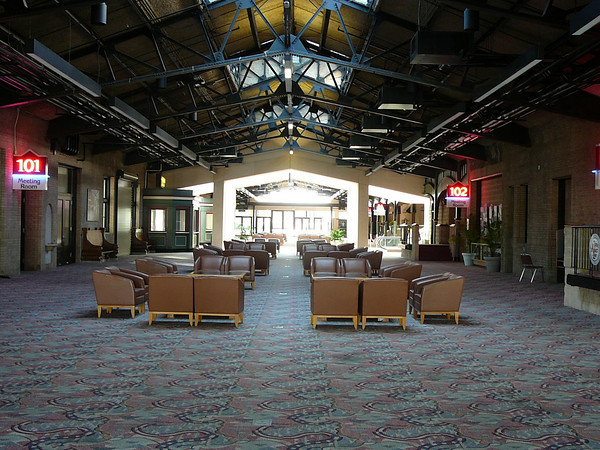