As Moonraker opens, Bond is in the firing range in the basement of the headquarters building, getting some firing work in with the Instructor.

The walls of the underground room took the crash of sound and batted it to and fro between them until there was silence. James Bond watched the smoke being sucked from each end of the room towards the central Ventaxia fan. The memory in his right hand of how he had drawn and fired with one sweep from the left made him confident. He broke the chamber sideways out of the Colt Detective Special and waited, his gun pointing at the floor, while the Instructor walked the twenty yards towards him through the half-light of the gallery.

(A sidenote – the reference to the Ventaxia fan is yet another product placement by Ian Fleming. The company is actually Vent-Axia and provides exactly the type of fan described here.)

The Colt Detective Special is short-barrelled revolver favored by detectives for both its stopping power (.38 Special) and ease of concealment.

Bond was likely using a second series CDS here, which were manufactured between 1947 and 1972. 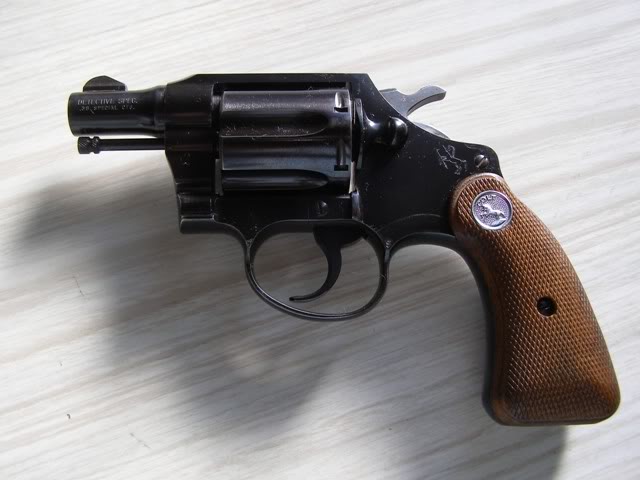 This is a 1956 model, so about a year or two away from the events of Moonraker, but as part of the second series of the CDS, the overall design would’ve been the same as the one James Bond was using.

Tee-Hee in Live and Let Die also carried a .38 Colt Detective Special, which Bond took off him after knocking him out. Bond then used the gun to shoot his way out of the garage.