An essential part of the James Bond breakfast at home as laid out in From Russia With Love is the coffee.

It consisted of very strong coffee, from De Bry in New Oxford Street, brewed in an American Chemex, of which he drank two large cups, black and without sugar.

De Bry was a Paris chocolatier and confectionery which had a store in London in Ian Fleming’s day. They supplied coffees as well, which Bond was partial to. We learn in other books that Bond enjoyed Jamaican Blue Mountain coffee. Perhaps De Bry imported it. Unfortunately the location went out of business many years ago.

In looking through various publications in an effort to get a feel for the kind of shop it was, I found a few references to De Bry and it’s offerings.

London Night and Day, 1951: A guide to Where The Other Books Don’t Take you.

PROSPECTING FOR A RESTAURANT in Soho by peeping through windows? Look in at Maison Bertaux, 28, Greek Street. Open 9.30 to 6.0. Will do equally well for coffee in the morning. For that matter, to your horror maybe, you can have coffee in the afternoon. Salon de Thé au premier, in pink, concealed lightning and gilt mirrors. Seats a very tight 28, with no room for coat hangers. Cakes at 6d. each, a cup of coffee at the same price. Shop and pay desk are on the ground floor. Owned by that excellent firm, De Bry, which has one branch in New Oxford Street, and another one at Marble Arch.

During World War II, supplies from Paris were cut off, resulting in a chocolate shortage.

In the London papers, the confectioner De Bry de Paris, located at 64 New Oxford Street, ran an advertisement saying that their supply of chocolates had dwindled: “Therefore the many, who in the past delighted in the enjoyment of the De Bry quality, must of necessity be reduced to the fortunate few who can obtain them.”

In the Diary Of Virginia Woolf Volume 5,  she references a conversation about the war with “the woman at de Bry (Coffee Merchants, New Oxford Street)”

Chocolates and sweets of exquisite flavour and quality, with jams, cocoa, and chocolate powder, etc., formed the exhibit of M. A. E. Marious de Bry of 64, New Oxford Street, whose manufactures we would specially commend to our reader’ attention. 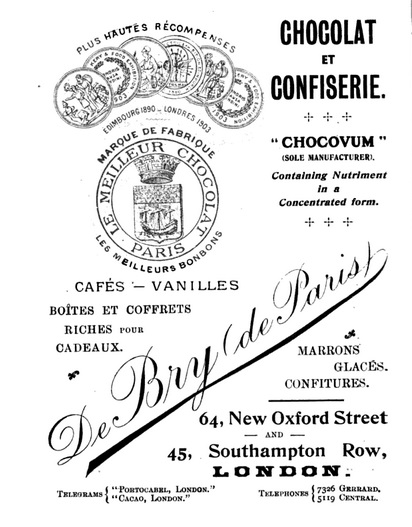