When Ian Fleming passed away in August of 1964, there was something of a rush to document his life in biographies.

In 1965-66, no less than four biographies of Fleming hit the shelves, led by John Pearson’s The Life of Ian Fleming. Also coming out was Henry A. Zeiger’s Ian Fleming: The Spy Who Came In With the Gold,  Eleanor and Dennis Pelrine published Ian Fleming: Man with the Golden Pen and then finally we have Ian Fleming: The Fantastic 007 Man, by Richard Gant.

In addition to the biographies, works such as Kingsley Amis’ The James Bond Dossier and 007 James Bond: A Report by O.F. Snelling also appeared during this time.

I’ve read Pearson several times, as all Ian Fleming fans undoubtedly have. Within the last year, I’ve acquired and read the other three as well. In time, hopefully I’ll do writeups on the Zeiger and Pelrine efforts, but today, I wanted to bring you a look at the work of Richard Gant.

First of all, who was Richard Gant?

No, it wasn’t the actor who wrote the book. If you did a search for Richard Gant the writer, you wouldn’t come up with much. Wikipedia would tell you that Richard Gant was a pseudonym for Brian Freemantle.

Yes – the Brian Freemantle who has written the Charlie Muffin MI5 series, including Red Star Falling as recently as 2013.

I love Wikipedia, but realize it isn’t the omniscient oracle that we may wish it to be. Thus, I contacted Freemantle’s agent to see if I could get confirmation that he actually wrote Ian Fleming: The Fantastic 007 Man.

I was pleased to receive a direct response from Mr. Freemantle himself. His answer to my inquiry was rather interesting.

It turns out that he did NOT write our Ian Fleming biography. It was actually written by a close friend of Freemantle’s, another well-known novelist; Leslie Thomas, probably best known for his comic novel, The Virgin Soldiers. (and later, Stand up Virgin Soldiers.) 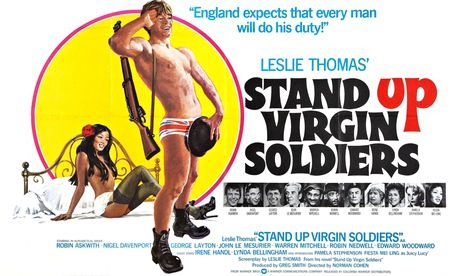 In 1964, Thomas published his first book, This Time Next Week about his life as a Barnardo orphan. The following year he wrote the Ian Fleming bio under the name Richard Gant. He was then approached about doing a followup to the book, this one about Sean Connery. As he was then in the midst of writing Virgin Soldiers, he suggested that Freemantle write it, as they shared the same agent, but keep the Richard Gant name, which is what happened. Freemantle wrote Sean Connery: The Gilt-Edged Bond  which was published in 1967 under the name Richard Gant.

Need more confusion? The Fleming book was published in the UK as The Man With The Golden Pen. 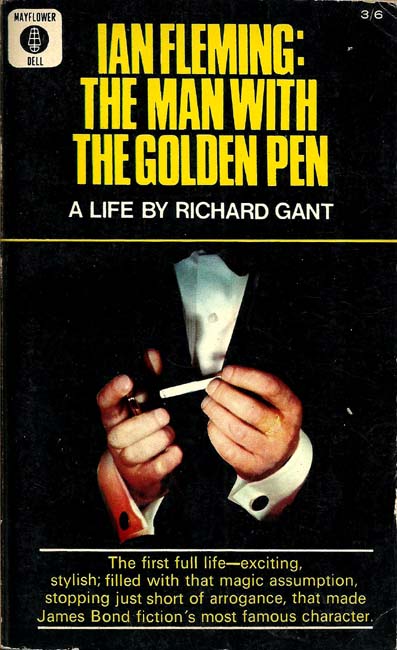 It appears however, that in the U.S, they changed the name to Ian Fleming: The Fantastic 007 Man, because there was already a book out in that country called Ian Fleming: Man With The Golden Pen. (Which we’ll talk about in a later post. Maybe.)

In terms of the actual biography, how does this one hold on up today?

Just as the James Bond novels are viewed by some as relics of another age, this biography might be viewed the same way. It is a product of its time.

The book is a pleasure to read. The writing is smooth and obviously the work of a talented author.

It is very polite and gentleman-like in its approach to documenting Fleming’s life. Nothing too salacious, criticism is directed only at the work, not the man, and in many ways the commentary on the novels mirrors what the critics at the time were saying.

Ian Fleming is framed as a mild-mannered, cultured gentleman who was self-effacing, yet able to navigate about in the world with command. His life from childhood to schooldays to his time in Naval Intelligence and as a stockbroker and newspaper editor is chronicled faithfully and quickly.

There are times however when the book isn’t as accurate on certain topics, particularly when it comes to the relationship of Ian and Anne Fleming.

The book says that Anne and Ian met while she was still Lady Rothermere, but we know their relationship went on well before that point, back to when she was with her first husband, Baron O’Neill.

When writing about the well-known parties that Anne often held, Gant says

That these gatherings never appealed to Fleming either before or after they were married–‘Gabfests’ he called them–did nothing to detract from the rightness of the marriage which was happy from the first day to the last.

While Anne and Ian certainly had a special love and devotion for each other, their marriage really couldn’t be categorized as ‘happy’ in any sense of the word. Gant does however, point out the disdain that Anne had for James Bond and the low regard in which she held Ian’s novels.

I do recommend the book for the Fleming/Bond enthusiast for a quick read, and also for some details which were new to me. For example, a James Bond comparison that I had not come across before was this:

Visually, Fleming always regarded Bond as looking like Henry Cotton the golfer, in his young days.

Hmm. I can see it. It’s not perfect – no comma of hair falling down – but you can see that face as Bond.

There are other details, even about Jamaica (Dr. Drew) which I hadn’t come across before, and quotes and insight from Fleming on his working methods which I found intriguing. There is even a reference to the island owned by Nina Dyer, which Fleming had swum out to frequently. Dyer had committed suicide in 1965, a fact which is noted in the book.

On the other hand many other details are lacking, as in Pearson’s bio, the name Blanche Blackwell does not appear in this book. Nothing about the other loves of his life, or details of Anne and Ian’s relationship before their marriage. This is perhaps the most obvious sign of the times, as back then, a person’s private life was not as aggressively delved into as it is now.

In addition, when biographies are written so close to the subject’s death, many of the principals in the life of that person are still living, and thus could be embarrassed or scandalized by details coming out. That was a large factor in the John Pearson book, and so when Andrew Lycett wrote his Fleming biography many years later, many of those people had since passed away and he was able to chronicle the more seedy aspects of the life of Ian Fleming.

The book winds down with a look at the films, and the Thunderball court case and then into Fleming’s final days and hours. It ends with Fleming’s own epitaph.

In closing, Ian Fleming: The Fantastic 007 Man or Ian Fleming: The Man With The Golden Pen if that is the version you come across, is a very smoothly written, interesting yet brief look at the life of the creator of James Bond. For the casual Fleming fan, I’m not sure I would go to the trouble of tracking down a copy of the book, but if you happen to come across it, it’s definitely worth a look.

Perhaps if only for the endpages of my copy which promote a series of books called “Ted Mark’s Swinging Adventures ” as “The Man From O.R.G.Y.”

One thought on “Ian Fleming: The Fantastic 007 Man”