After arriving in Jamaica in Live and Let Die, James Bond and companion Quarrel drive to the Western end of the island for a week of training before Bond is to make his undersea trek to the Isle of Surprise.

There is some confusion here, as Ian Fleming again took some creative licence with the naming. He calls the area near Negril Manatee Bay. There is a Manatee Bay in Jamaica, but it is on the Southern end of the island. The bay near Negril is Long Bay.

In short, the idea is that the name “Long Bay” wasn’t exotic enough, so Fleming searched for Bays near Long Bay. Trouble is, there are two Long Bays in Jamaica, and near to the “other” Long Bay was a Manatee Bay. That area is said to be where Columbus made a stop, something Fleming refers to in his story:

Here, because of the huge coastal swamps, nothing has happened since Columbus used Manatee Bay as a casual anchorage. Jamaican fishermen have taken the place of the Arawak Indians, but otherwise there is the impression that time has stood still.

Fleming may have grabbed the name Manatee Bay not realizing it was not near the Long Bay on the Western end of the island. Griswold notes Fleming had first typed Negril Bay, and later crossed it out and put in Manatee Bay.

Manatee Bay is currently a hot topic in Jamaica as conservationists are battling to keep it from being developed as another resort area. It’s being called most important remaining natural coastal habitat left on the island that link will show you some of the coastal swamps Fleming refers to.

Long Bay, near Negril is the place that Bond and Quarrel go to.

Bond thought it the most beautiful beach he had ever seen, five miles of white sand sloping easily into the breakers and, behind, the palm trees marching in graceful disarray to the horizon. Under them, the grey canoes were pulled up beside pink mounds of discarded conch shells, and among them smoke rose from the palm thatch cabins of the fishermen in the shade between the swamp-lands and the sea.

In a clearing among the cabins, set on a rough lawn of Bahama grass, was the house on stilts built as a weekend cottage for the employees of the West Indian Citrus Company. It was built on stilts to keep the termites at bay and it was closely wired against mosquito and sand-fly. Bond drove off the rough track and parked under the house. While Quarrel chose two rooms and made them comfortable Bond put a towel round his waist and walked through the palm trees to the sea, twenty yards away.

The area is still spectacular. 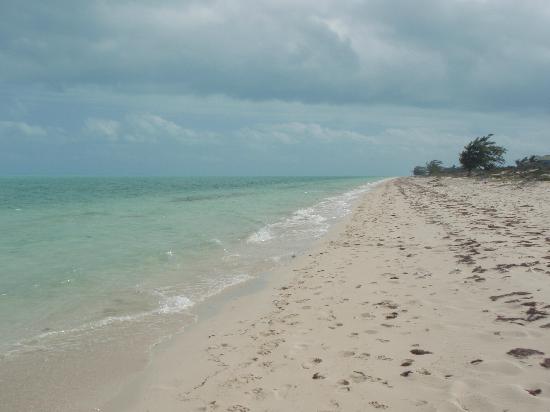 I couldn’t find anything about the a West Indian Citrus Company, but I did find this photo of a beach house used by the West Indies Sugar Company that was on Long Bay near Negril: 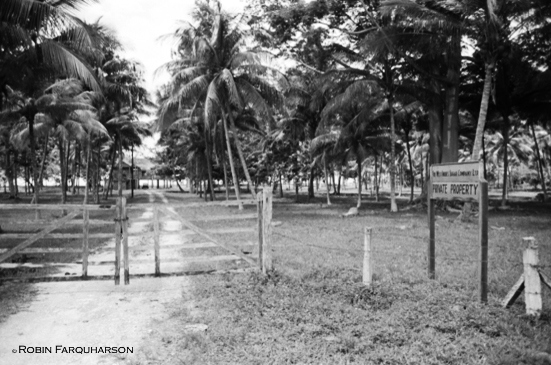 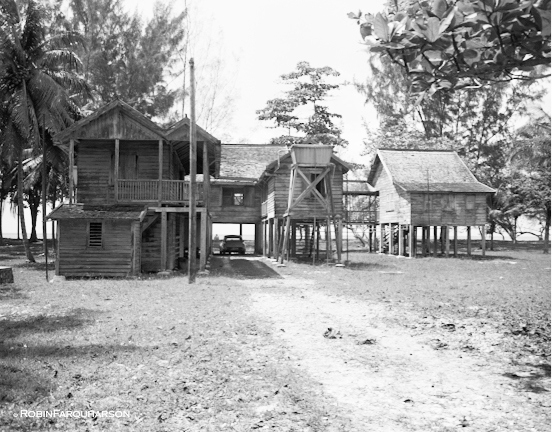 The photographer, Robin Farquharson has an amazing site of pictures from Jamaica from 1954 to present.

Did you ever wonder about duppies or the rolling calf?

No man walked alone for fear of the duppies under the trees, or the rolling calf