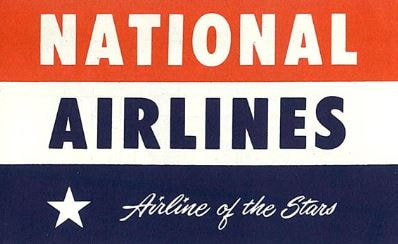 National Airlines, “Airline of the Stars”

‘National Airlines, “Airline of the Stars”, announces the departure of their flight NA 106 to La Guardia Field, New York. Will all passengers please proceed to gate number seven. All aboard, please.’

James Bond is in Miami Airport awaiting his Transamerica flight to New York, when he hears the above announcement of a flight from a competing airline.

National Airlines was a major passenger airline which operated from 1934 until 1980 when it was taken over by Pan Am. The slogan “Airline of the Stars” appeared on the planes and was used throughout the 1950’s in reference to Hollywood movie stars flying on the airline. In 1964 they changed the slogan to “Coast to Coast to Coast.”

In 1958, National became the first Airline to fly jets domestically in the United States, first going from New York to Florida, using a Boeing 707.

We’re not told the time that Bond is in the airport, but a look at a 1958 National Airlines flight table tells us that NA Flight 106 left Miami at 10:00PM and arrived in New York at 2:55AM. But as you see, the flight did not go to La Guardia Field, but rather to Idlewild (now JFK).