After James Bond reads about the Inspectoscope in Moonraker, he turns his attention to the next file, which is entitled “Philopon. A Japanese murder-drug.”

‘Philopon is the chief factor in the increase in crime in Japan. According to the Welfare Ministry there are now 1,500,000 addicts in the country, of whom one million are under the age of 20, and the Tokyo Metropolitan Police attribute 70 per cent of juvenile crime to the influences of the drug.

Fleming then goes into the addictive properties of the drug, and how with abuse, the drug creates a persecution complex within the abuser, who feels that others are trying to kills him, and thus murder becomes self-defense. The report says that in the hands of a criminal “master-mind” the drug could become a dangerous weapon causing addicts to kill without conscience. The last thing Bond reads before putting the report down is “As usual Korean nationals are being blamed…”

What is this killer drug, Philopon?

Yes, Japan had something of a methamphetamine epidemic after World War II. The Japanese army had actually supplied it to soldiers and even factory workers to enable them to work longer hours (without eating). It was given to kamikaze pilots so they could endure long flights and not mind crashing into things and ending their own lives.

After the war, many of these people were still addicted. That number grew to the 1.5 million number that Fleming mentions above. (more on this below) This was exacerbated by the government releasing the stores of meth that it had built up during the war.

In 1951, the Japanese Ministry of Health prohibited meth in Japan, but this only caused even more production of the drug.

I came across a research paper on the topic – Methamphetamine Use in Japan after the Second World War: Transformation of Narratives. It has a few point of interest, which also back up Fleming’s quotes.

As for the brand Philopon,

One of the most famous and popular medicines was Philopon,which was extracted by Dr. Miura and the Dainippon Pharmaceutical Company and made available in 1941. Philopon is a coined word,combining the Greek   philo (love) and  ponos (labor),and was a synonym for stimulants until the 1970s.

The paper quotes from the Tokyo Metropolitan Police report on their 1954-55 campaign against meth and echos more of what Fleming wrote, both in the numbers and on blaming the Koreans.

Seventy percent of these smugglers,unlawful producers,and bootleggers consist of Korean people and they gnaw at the bodies and spirits of approximately 1,500,000 of our fellow countrymen. At its most extreme, we seem to be living with a large crowd of people going insane and becoming brutal offenders. . . . Our fellow countrymen, especially young people,are the victims of Korean people seeking their own interests, and the result will be the destruction of our future generations, who will become sick and decline in health and finally turn into addicts who will destroy our entire social order. . . . Korean people who are well informed of the dangers of stimulants rarely use it themselves nor do they allow their children to use it.

Fleming also mentions the Bar Mecca murder case which was in the headlines at the time as well, it was a 1953 murder case in which the motivation was money for Philopon.

Once again, Ian Fleming was mixing current events and news reports into his novels, which likely made them seem even more authentic to the reader. Now, 60 years later, much of these events and references are lost to time. 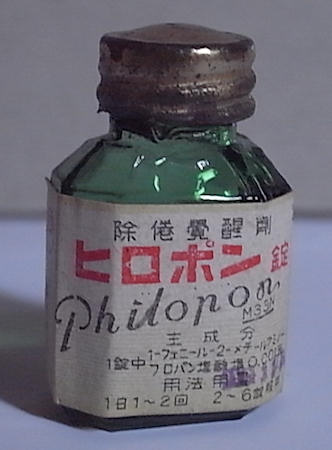