This beverage of fermented rice (closer to beer than a rice wine) is a Japanese staple, and James Bond’s drink of choice during You Only Live Twice. In fact, other than “a pint of Jack Daniels” he consumes at the Miyako, it appears to be the only alcoholic drink Bond drinks in the book.

In the first chapter of the novel has already consumed “five flasks” of Sake, the effect of which he compares to one double Martini. He says he’ll need another double Martini before the night is out.

The geisha madame, Grey Pearl, says that Bond is “undoubtedly an eight-flask man.”

Bond goes past the eighth flask of sake while out with Dikko Henderson. Before heading to the castle of Dr Shatterhand, during his “last supper,” Bond orders five flasks of sake to eat with his Fugo – Japanese blowfish. 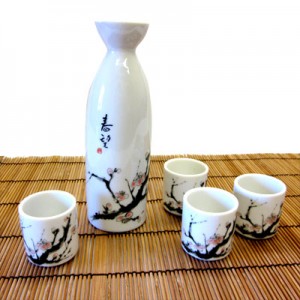