Mentioned a few times in Moonraker, this lighthouse-on-a-boat is semi-prominent in the background of the story.  The ship is close enough to Drax’s base that when Bond first arrives, the light from the ship briefly illuminates the dome of the rocket silo.

Then when Bond is looking through the late Major Tallon’s room, he comes across a chart with some mysterious faint markings on it with a bearing directly towards the South Goodwin Lightship.

The next morning, Bond awakens and leaves the base early in the morning. He takes a look out at the channel:

Out at sea, in the early mist that promised a hot day, the South Goodwin Lightship could just be seen, a dim red barque married for ever to the same compass point and condemned, like a property ship on the stage of Drury Lane, to watch the diorama of the waves and clouds sail busily into the wings while, without papers or passengers or cargo, it lay anchored for ever to the departure point which was also its destination.

At thirty seconds’ interval it blared its sad complaint into the mist, a long double trumpet note on a falling cadence. A siren song, Bond reflected, to repel instead of to seduce. He wondered how the seven men of its crew were now supporting the noise as they munched their pork and beans. Did they flinch as it punctuated the Housewife’s Choice coming at full strength from the radio in the narrow mess? But a secure life,* Bond decided, although anchored to the gates of a graveyard.

When Bond and Gala start out on their afternoon together, they can see the ship clearly.

The white lettering on the South Goodwins Lightship was easy to read and even the name of her sister ship to the north showed white against the red of her hull.

At the end of the novel, as M is recapping to Bond the aftermath of the Moonraker launch, he notes that the Goodwin lightships broke their moorings.

The South Goodwin Lightship was, as Fleming noted in the footnote, the site of a tragedy on November 26th, 1954, as 80 mph winds capsized the ship, killing all seven crew members. There was one survivor, a Ministry of Agriculture officer who had been visiting the ship.

Here is some footage of the capsized ship, along with other damage from the storm. 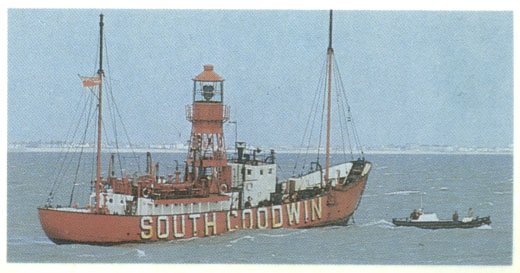 I like that you can see the cliffs in the distance in the picture above. 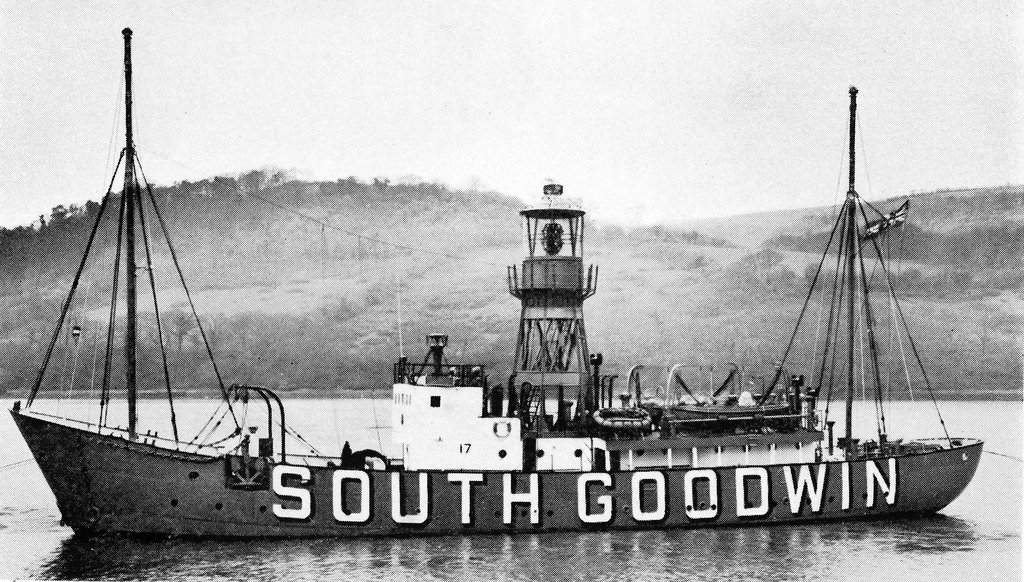 One thought on “South Goodwin Lightship”