In Casino Royale, James Bond and Vesper are having champagne, and Bond originally requests a Taittinger ’45. The wine waiter replies:

‘A fine wine, monsieur,’ said the sommelier. ‘But if the monsieur will permit,’ he pointed with his pencil, ‘the Blanc de Blanc Brut 1943 of the same marque is without equal.’

Bond accepts the suggestion, noting to Vesper that while this is not a well-known brand, “it is probably the finest champagne in the world.”

In seems that Bond has spent time extolling the virtues of Taittinger to others, including his boss, M. From Moonraker:

We’ve got some good champagnes, haven’t we, Grimley? None of that stuff you’re always telling me about, I’m afraid, James. Don’t often see it in England. Taittinger, wasn’t it?”

Bond tries to play it down, saying it was only a “fad” of his, but we know better. Following Grimley’s suggestion however, Bond ends up with a Dom Perignon ‘46.

In On Her Majesty’s Secret Service, Bond has checked into the Hotel Splendide, he “ordered from Room Service a bottle of the Taittinger Blanc de Blanc that he had made his traditional drink at Royale.”

So, that tradition appears to have begun in Casino Royale.

This ad is from just a couple of years after OHMSS was written: 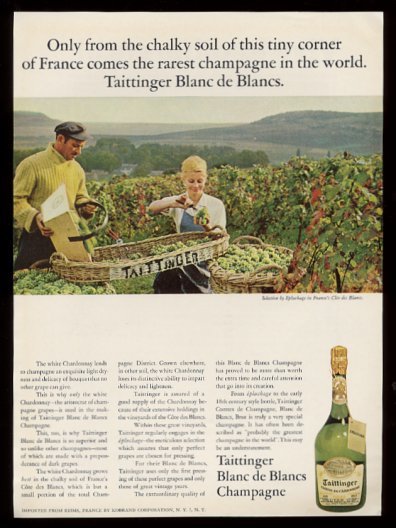