While reviewing the files that have piled up in his in-tray in Moonraker, James Bond comes across two files of which the contents are shared with us.

The first one is for an instrument used for detecting hidden contraband.

The Inspectoscope,’ he read, ‘is an instrument using fluoroscopic principles for the detection of contraband. It is manufactured by the Sicular Inspectoscope Company of San Francisco and is widely used in American prisons for the secret detection of metal objects concealed in the clothing or on the person of criminals and prison visitors. It is also used in the detection of IDE (Illicit Diamond Buying) and diamond smuggling in the diamond fields of Africa and Brazil. The instrument costs seven thousand dollars, is approximately eight feet long by seven feet high and weighs nearly three tons. It requires two trained operators.

Where did this file come from? The September 19th, 1953 issue of The New Yorker (No Hiding Place).

For the past two years, the local customs office, which is fairly hard pressed even in the off seasons, has been aided in its work by a cumbersome but extremely effective fluoroscopic device known as the Inspectoscope. Any traveler arriving here by plane or ship and suspected of concealing contraband of one sort or another is apt to be whisked to the local headquarters of the Customs Agency Service, at 201 Varick Street, and subjected to the uncannily close scrutiny of this one-eyed monster, which is capable of detecting undeclared objects not only in secret compartments of suitcases and the folds of old Inverness capes but inside the human body as well. Horrid, but that’s smuggling for you.

It goes on to talk some about diamond smuggling, the motivation and methods of the practice. Then, we get the payoff:

To top off our visit, Mr. Duncan led us to the rear of the building and showed us the Inspectoscope, which approximately eight feet long by seven feet high, weighs as much as an elephant, is manufactured by a San Francisco firm called the Sicular Inspectoscope Company, cost seven thousand dollars, and consists of a low platform with a cabinet full of unspeakable complicated electrical equipment at one end and a control booth at the other. It is widely used in prisons, he said, to determine whether convicts or supposedly innocent visitors are concealing knives, blackjacks, files and the like.

Wow! It was pretty cool to find this article, and realize that Ian Fleming had read it, and used the material in his book. The amount of information on diamond smuggling within the article makes me also think that this might’ve gotten him on the track to writing The Diamond Smugglers and Diamonds Are Forever.

In fact, in Diamonds Are Forever, when Bond is talking with Ronnie Vallance about his mission.

Let’s hope the whole job doesn’t blow up in my face in the customs shed at Idlewild. I shall look pretty silly if the Inspectoscope picks me up.

Here is another column on the new device from the year in which Fleming wrote Moonraker.

Customs agents are going after smugglers with new “X-ray eyes” that peer into sealed packing cases in search of contraband. The first “inspectoscope” ever built has been put to work on the New York waterfront checking crates and cartons that may carry forbidden cargo under innocent labels.

The device, which works on the principle of a doctor’s fluoroscope was built by a West Coast firm at the suggestion of customs officials. It cost $8000, and is much more powerful than similar instruments used to detect weapons or files on persons entering prisons.

Leroy Mackerodt, deputy surveyor of customs, said the inspectoscope can “look” into about 800 packing cases a day. A conveyor belt may be used to speed up the process of moving cargo before the inspectoscope’s “eye.”

Traces Narcotics
Customs agents believe the device will be especially valuable in tracking down small parcels of narcotics that can be hidden in cases containing otherwise-innocent cargo.

The inspectoscope later may be put to use in checking the baggage of travelers. The present model generates so much radioactivity that it cannot be used to check the passengers themselves for contraband that might be hidden in their clothing.

Customs inspector Joseph Baldwin demonstrated the inspectoscope by examining a crate marked “iron ornaments” to see if that was what it really contained. The screen-like eye of the machine was fitted against the crate and Baldwin flipped a switch.

On another screen, much like that of a television set, a ghostly picture of the crate appeared. The decorative ironware inside the crate was clearly visible.

Mounted on Trailer
The inspectoscope is 10 feet high and 14 feet long. It is mounted on a trailer so it can be moved from pier to pier.

Baldwin said that, with experience, an operator could become familiar with the appearance of different materials on the inspectoscope screen. Then he could tell at a glance whether a package contained burlap, for instance, or some more expensive fabric.

The power of the inspectoscope is so great than an operator can remain at the controls for only two hours at a time without risking harm from its rays.

Baldwin said the machine ought to be fool-proof, with one exception. If cargo were packed in a case lined with lead, which resists radioactivity, the inspectoscope would go blind.

I like that they give away the way to beat the machine at the end! Also, that so much radiation emanated from the instrument that operators couldn’t go more than two hours on the machine.

In Moonraker, Bond reflects that he’ll need to find another hiding place or way to carry his gun when he travels abroad. Clearly, Fleming did see this as something that would be used on a wide-scale in the future, and putting it into the book assists the story in seeming modern, even though it is 60 years old! 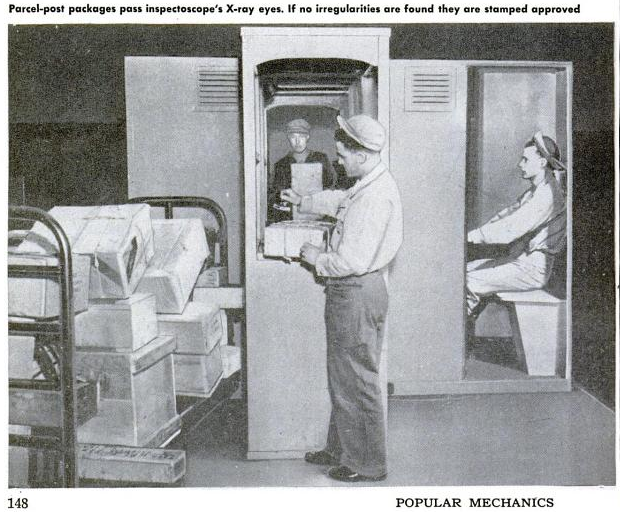 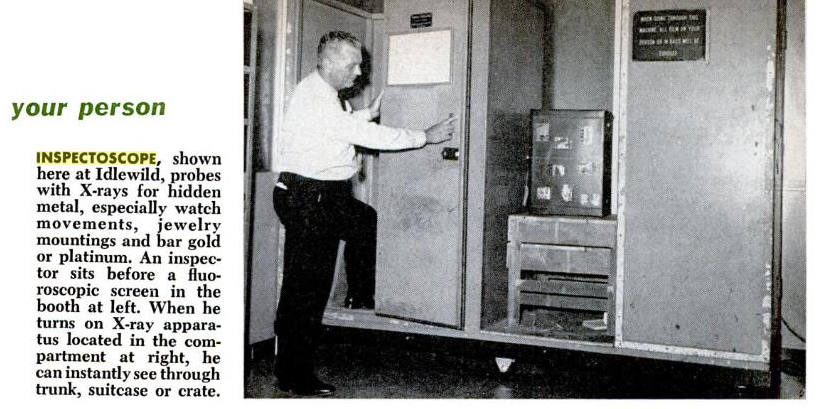 In From Russia With Love, the device is referenced again, as while Bond is reviewing the new briefcase that Q Branch put together for him, with its hidden compartments:

He thought how surprised the ticket clerk at London Airport would have been if she had weighed the case instead of letting it go unchecked as an ‘overnight bag.’ And if, in their turn, Customs had been intrigued by its weight, how interested they would have been when it was slipped under the Inspectoscope.

The Inspectoscope – clearly a device that Ian Fleming was fascinated with.