Page will be updated as we go through the novels.

There are times James Bond drinks brandy, or even a (few) brandy and soda(s) or ginger ale.

For the latter, he seems to drink them when flying, or getting ready to fly. Perhaps the ginger ale is for his stomach?

In Casino Royale, when Bond and Vesper have their first dinner at the inn following Bond’s recovery, they finish their meal with coffee and brandy.

In Moonraker, when playing cards at Blades, large balloon glasses of brandy, along with coffee, are served at the tables. After Bond tries the brandy, M says:

“Comes from one of the Rothschild estates at Cognac. About a hundred years ago one of the family bequeathed us a barrel of it every year in perpetuity. During the war they hid a barrel for us every year and then sent us over the whole lot in 1945. Ever since then we’ve been drinking doubles.

Also, when Bond and Gala Brand are returning from having a cliff face dropped on them, they head off to a local inn where Gala has two, and Bond has three brandy and sodas.

In Thunderball, after his experience on “the rack,” Patricia Fearing sneaks Bond some Brandy as a “stimulant.” Bond drinks two glasses, over ice.

In On Her Majesty’s Secret Service, while in character as Sir Hilary Bray, as he is waiting to depart for Switzerland,

Bond had a double brandy and ginger ale and stood aloof from the handful of other privileged passengers in the gracious lounge, trying to feel like a baronet.

Bond then has another just prior to takeoff.

When Bond has escaped and has gotten back to London, he instructs Mary Goodnight to have May brew him “plenty of black coffee and to pour two jiggers of our best brandy into the pot.”

After the assault on Piz Gloria, Bond finds himself in the hands of the Red Cross, being treated for his injuries, and the Red Cross man “produced a flask of brandy out of his box and offered it to Bond. Bond gratefully took a long swig.”

In You Only Live Twice, on his way to Japan via J.A.L., Bond “ordered the first in a chain of brandies and ginger ales that was to sustain him over the Channel, a leg of the North Sea, the Kattegat , the Arctic Ocean, the Beaufort Sea, the Bering sea, and the North Pacific Ocean…”

In Octopussy, the brandy and ginger ale “the drunkard’s drink” is the drink of choice for Major Dexter Smythe, who has them invariably “stiff” – “almost fifty-fifty” beginning at 10:30 am. 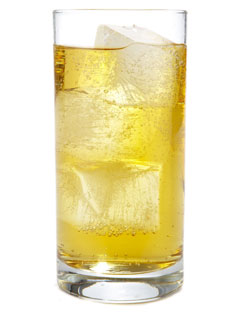 One thought on “Brandy”