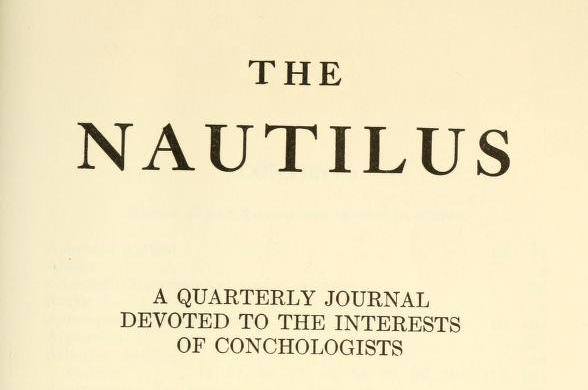 I talked to the local schoolmaster, without telling him my secret of course, and he found out that there’s an American magazine called Nautilus for shell collectors. I had just enough money to subscribe to it and I began looking for the shells that people said they wanted in the advertisements.

James Bond is talking with Honey Rider about her life and how she began collecting shells for money.

The Nautilus started in Philadelphia in 1886, as The Conchologists’ Exchange (TCE). William D. Averell (1853–1928), a shell trader from Chestnut Hill, Philadelphia, created TCE as a small publication aimed at “giving information of vital interest to the student of Mollusca” (Averell, 1886a).*

In 1889, the publication was renamed The Nautilus. It is a peer-reviewed quarterly magazine on the subject of malacology. Since 1999 it has been under the purview of the National Shell Museum. Archives of the publication are available online here.

It is fitting that Fleming would reference perhaps the most prestigious publication in the field in his book. While I don’t know if Fleming himself was a subscriber, it’s not out of the realm of possibility, given his interest in aquatic life.

As Honey stated, the publication would have sections where collectors would be asking for specific shells, or looking to exchange shells from a different area.