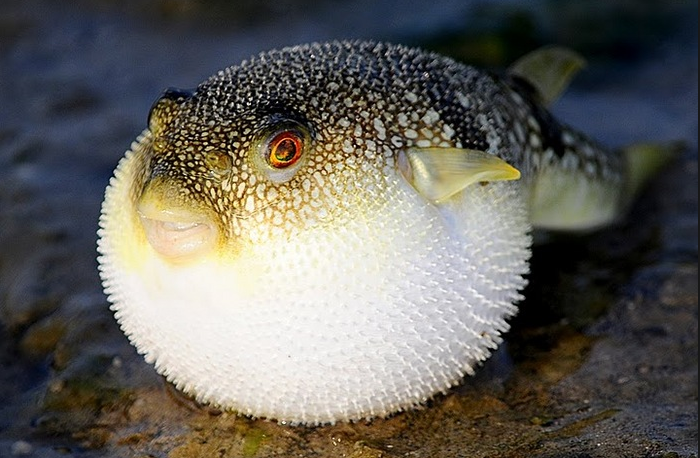 In Dr No, once M and Sir James Molony have ended their back and forth over the health and prospects of James Bond, M queries as to the type of poison that had nearly killed Bond.

By the way, did you ever discover what the stuff was that Russian woman put into him?”

“Got the answer yesterday.” Sir James Molony also was glad the subject had been changed. The old man was as raw as the weather. Was there any chance that he had got his message across into what he described to himself as M’s thick skull? “Taken us three months. It was a bright chap at the School of Tropical Medicine who came up with it. The drug was fugu poison. The Japanese use it for committing suicide. It comes from the sex organs of the Japanese globe-fish. Trust the Russians to use something no one’s ever heard of. They might just as well have used curare. It has much the same effect-paralysis of the central nervous system. Fugu’s scientific name is Tetrodotoxin. It’s terrible stuff and very quick. One shot of it like your man got and in a matter of seconds the motor and respiratory muscles are paralysed. At first the chap sees double and then he can’t keep his eyes open. Next he can’t swallow. His head falls and he can’t raise it. Dies of respiratory paralysis.”

“Lucky he got away with it.”

“Miracle. Thanks entirely to that Frenchman who was with him. Got your man on the floor and gave him artificial respiration as if he was drowning. Somehow kept his lungs going until the doctor came. Luckily the doctor had worked in South America. Diagnosed curare and treated him accordingly. But it was a chance in a million.”

The globe-fish, or puffer fish is a member of the species of fish of the family Tetraodontidae. These fish have the ability to inflate themselves to a globe several times their normal size by swallowing water or air when threatened. The skin, liver and sex organs of the fish contain Tetrodotoxin.

Tetrodotoxin is said to be 10,000 times more lethal than cyanide. As Sir James mentions, the poison interferes with the transmission of signals from nerves to muscles and causes an increasing paralysis of the muscles of the body. Bond was saved because  Rene Mathis gave him artificial respiration, and the Doctor on site thought Bond’s symptoms were similar to curare and treated as such.

Interestingly, eight years after his experience with Rosa Klebb (according to Griswold, that meeting took place on August 19th, 1954) while James Bond is on assignment in Japan for the events of You Only Live Twice where he has a dinner with Tiger Tanaka, who announces to Bond that they will be dining on Fugu fish.

‘Fugu is the Japanese blow-fish. In the water, it looks like a brown owl, but when captured it blows itself up into a ball covered with wounding spines. We sometimes dry the skins and put candles inside and use them as lanterns. But the flesh is particularly delicious. It is the staple food of the sumo wrestlers because it is supposed to be very strength-giving. The fish is also very popular with suicides and murderers because its liver and sex glands contain a poison which brings death instantaneously.’

If Bond recalls that he nearly died from Fugu poisoning, he doesn’t mention it to Tiger, and gamely goes ahead with the meal.

A very beautiful white porcelain dish as big as a bicycle wheel was brought forward with much ceremony. On it were arranged, in the pattern of a huge flower, petal upon petal of a very thinly sliced and rather transparent white fish. Bond followed Tiger’s example and set to with his chopsticks. He was proud of the fact that he had reached Black Belt standard with these instruments-the ability to eat an underdone fried egg with them.

The fish tasted of nothing, not even of fish. But it was very pleasant on the palate and Bond was effusive in his compliments because Tiger, smacking his lips over each morsel, obviously expected it of him. There followed various side-dishes containing other parts of the fish, and more sake, but this time containing raw fugu fins.

As Tiger tells Bond, every fugu restaurant has to be manned by experts and be registered with the State because of the risk of poison. Even today that remains the case.

According to Griswold, this meal took place on October 2nd, 1962. Are we to believe that Bond didn’t know what was in the spike in Rosa’s shoe, that he forgot about it, or that because of the seriousness of this assignment, he went ahead and participated in the meal?

One thought on “Fugu Poison”