In Diamonds Are Forever, after smuggling in the Diamonds and taking Tiffany case to dinner at 21, James Bond spends the day in his Astor hotel room writing his report to M. He takes a break for dinner.

Bond sent the cable ‘Collect’ via Western Union, had his fourth shower of the day and went to Voisin’s where he had two Vodka Martinis, Oeufs Benedict and strawberries. Over dinner he read the racing forecasts for the Saratoga meeting, from which he noted that the joint favourites for The Perpetuities Stakes were Mr C. V. Whitney’s Come Again and Mr William Woodward Jnr’s Pray Action. Shy Smile was not mentioned.

Voisin was a famous Park Avenue French restaurant that operated from 1913 until the late 1960’s. Originally located at 375 park Avenue, that building was torn down and the restaurant moved in the early 1950’s to 575 Park Avenue – which still exists as The Beekman.

The meal was pretty standard for Bond – the Martini’s, Eggs Benedict and the strawberries – a meal replicated in some form or another several times throughout the novels.

Also of note is the reference to William Woodward, Jr. This was a friend of Fleming’s who he met at their mutual friend Ivar Bryce’s farm in Vermont. In Andrew Lycett’s biography of Fleming, he says that Woodward and Ian had a “cool, sardonic friendship.” Fleming also pronounced him “one of the best Americans he had ever met.” Fleming also told Woodward that he should divorce his wife – advice that actually might’ve been the right thing to do.

Woodward also introduced Fleming to the Studillac. After Woodward’s shocking death, Fleming honored Woodward by writing him into the book as well as by using the Studillac.

Here is the interior of Voisin, just as James Bond would’ve seen it: 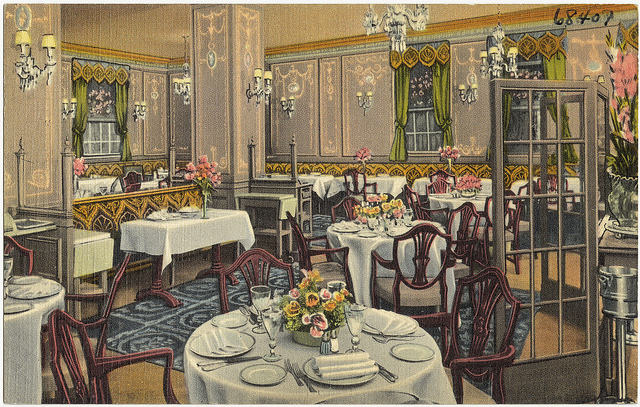