After administering the beatdown of Sir Hugo Drax at the bridge table in Moonraker, Bond explains in private to M and Basildon what had just happened.

He fanned the red pack out on the table and showed M. and Basildon that it would have produced the same freak grand slam that had defeated Drax.

“It’s a famous Culbertson hand,” he explained. “He used it to spoof his own quick-trick conventions. I had to doctor a red and a blue pack. Couldn’t know which colour I would be dealing with.”

Culbertson was Ely Culbertson, a pioneer in the game of contract bridge, who reached his peak of fame and dominance during the 1930’s.

If you have a few moments, I recommend this 1954 article from Sports Illustrated about a famous match Culbertson played in 1931 in London, which to me, makes me at least wonder if Fleming got some of the ideas for the Moonraker battle from this game. It was played in high society, with a lot of bluster and gamesmanship being tossed around, with tempers flaring.

Culbertson was a fascinating man, known for his outlandish spending habits, once spending $5,000 on shirts on Fifth Avenue, and known for smoking his own brand of cigarettes (sound familiar?)  at $7 a day. 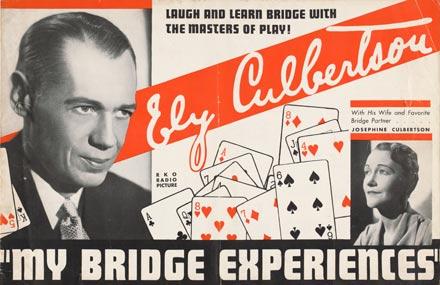 Here’s another informative look at Culbertson and his bridge playing and slam methods – Bridge; RECOLLECTIONS OF CULBERTSON’S SLAM-BIDDING.

One thought on “Culbertson Hand”